It’s hard to believe our son is already five years old, but I was prepared to throw him a pirate party for his first birthday.  Every time my husband would pick on me for going “overboard” (ha ha, get it?), I would scoff at him and say, “He’ll remember this party for the rest of his life!”

Since a baby’s first birthday party is more for the adults and older kids than the birthday baby himself, it gives me an excuse to throw a blowout of a party.  First, the construction of the cake.  It had to be good.  It had to be massive.  It had to be amazing.

Two weeks before the party, I got started on the cake topper, which was a treasure chest made out of rice krispie treats.  I bought a box of 16 treats, then put them all together to start the construction. 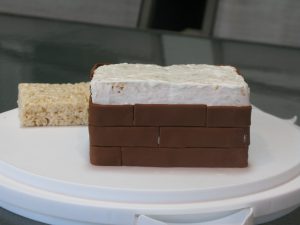 After they were put together, I slathered some icing all around the sides and top.  The brown fondant was rolled out using a fondant roller, then cut into strips and wrapped around the treats to give it a real look of wooden planks.  The only thing I would do differently with this is use chocolate icing as a base, so there wouldn’t be any white specs of the buttercream underneath the fondant. 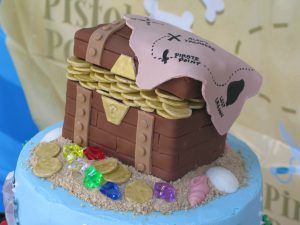 The gold coins were made out of fondant as well.  I rolled out white fondant, using a small circle cutter to cut out the shapes, then painted them with gold food coloring.  This took several coats.  After the coins dried completely (couple of days), I layered them on top of the treats.  Skewers were cut to fit, and placed horizontally through the top section of the treats to secure them together.  More icing was piled on top and smoothed for a rounded look, then covered with the strips of fondant.  Toothpicks were stuck in the back side of the base of the chest, then the top part of the chest was placed on top of the toothpicks and coins.  The toothpicks secured the top part to the bottom.  The chest was placed on a small cake board, then cut to fit.  Dowel rods were placed in the top tier of the cake to prevent the chest from sinking into it (that thing was heavy when finished).  Graham cracker crumbs were used as “sand” and the seashells were made out of chocolate using a seashell mold.  The jewels are plastic, and I used the majority of the jewels in the package for making treasure bags (along with plastic gold coins, plastic jewel rings, beads, and candy).  The treat bags were hidden in the back yard for the kids to do a treasure hunt, which they loved! 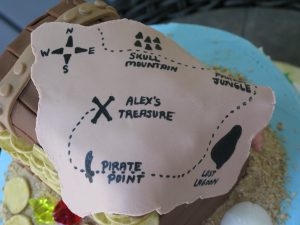 The treasure map on top of the chest is also made out of fondant.  I rolled out the fondant, then cut it to shape using a paring knife.  An edible black pen was used to draw on it. 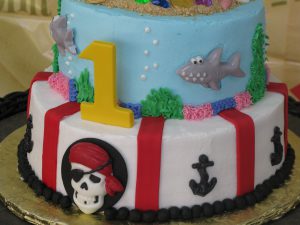 The pirate skull, 1, anchors, and sharks are all made out of chocolate, using chocolate molds.  The red stripes and black cannon balls on the bottom tier are fondant.  The decorations on the top tier for the ocean are buttercream icing. 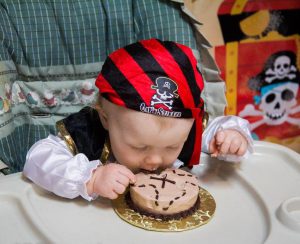 Here is our little pirate, diving into his smash cake.  It was a 4 inch cake covered with buttercream and chocolate icing.  Go ahead and take a bite, big guy.  It’s your day. 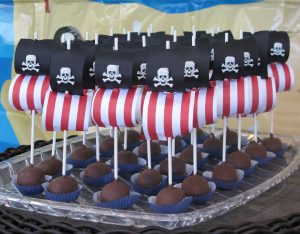 And, here we are with the pirate ship cake pops.  When I originally saw these, I got all excited and just HAD to make them…but wanted to add a little more than the original image I found, which only had the red and white stripe sails.  We went to our local arts and crafts store, which is where I found the card stock red and white stripe paper, along with black paper and the skull and crossbones stickers.  The cake pops are chocolate, covered with milk chocolate.  None of these were left at the end of the party. 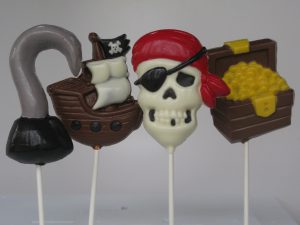 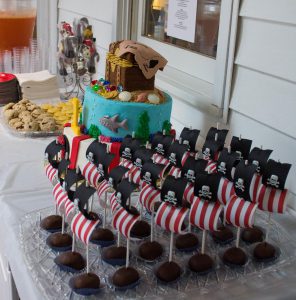 Here’s the dessert table, which also had chocolate chip cookies (made small and thick to look like gold nuggets), and peanut butter ritz cookies made with yellow chocolate to resemble gold coins. 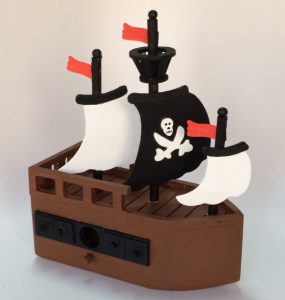 Oh, and while we were at the arts and crafts store, silly me made the mistake of walking past the bird houses and came across this one.  It ended up in my cart, along with paint brushes and paint.

I was very happy with how it turned out, and used it as a table centerpiece for the party.  We’ll put it up in the yard since the party has passed for our visual enjoyment to watch the pirate birds play in their new pirate ship house. 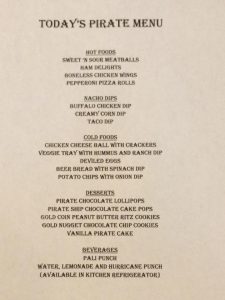 Here was our menu for the party.  I decided to print out copies and place them around the house so I didn’t have to repeat myself 20 times going over everything there was to eat. Almost all of the food items served at the party are included in my “Party Time!” cookbook! 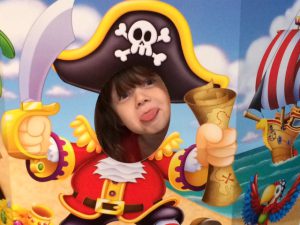 The photo prop was bought for pictures like these. 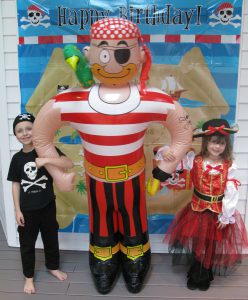 And who doesn’t love an inflatable pirate? 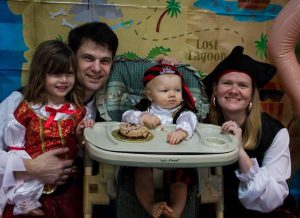 It’s not a pirate party if you’re not dressed as a pirate, right?  Exactly!  ARRRRGH!!!