Click HERE to watch the slide show of this cake, with many more pictures!

A few years ago, my nephew turned 10.  This baffled me at the time, considering I have the video footage of his 2nd birthday, blowing out the candle and keeps asking his daddy “More, more?” for him to relight it so that he could blow it out again.  Oh, that’ll be a cute video to show when he turns 21.  Anyway, he was probably my biggest fan when it came to making decorative chocolates.  He thought it was SO cool when I tell him that he can eat one of the decorations because it’s chocolate.  Then, when he was looking at my slide shows, I kept getting the question, “Is THAT chocolate too?  Awesome!!”  When his birthday approached, I asked him what kind of cake he wanted.  “Chocolate,” he responded, in his “cool” voice.  “Okay, but how do you want it decorated?” I asked.  He responded again, “Chocolate.”  Oh boy, he’s really getting to that “cool” age, which would explain that nonchalant tone.  When he walked away, I asked my sister-in-law what he’s into these days.  She said that he really likes ocean life and wants to be a marine biologist when he grows up.  A gigantic lightbulb went off over my head, and this was it.  So, I started doing some research, and got super excited when I came across cakes that had a giant shark coming out of the top.  Now THAT is something cool that I know he would love!  But, I also had to incorporate those chocolates, since he loves them so much.  Add a little bit of cuteness, without him realizing it, because he’s going to love that shark so much, and will eat the chocolates as soon as I give him the green light. 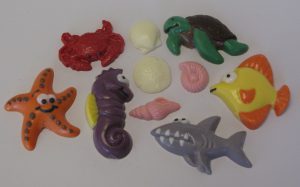 So, off I started on the chocolates.  I already had a crab mold, so I made a few of these to start.  I ordered another chocolate mold that had the turtle, seashorse, starfish, shark, and fish from Amazon and made the chocolates a few days ahead. 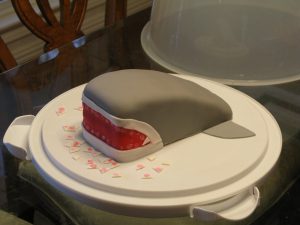 Next was the shark, and that’s when disaster hit.  Well, for me it was a disaster.  I originally had it in my head that I wanted to make the shark out of rice krispie treats, so I formed the whole thing out, iced it, then covered it in fondant…and was disgusted with how it turned out.  I was basing the vision in my head on another shark cake, and this looked NOTHING like I wanted it to.  In the picture here, so you can see that the shark has no teeth, but there are little white dots from the icing where I had the teeth attached.  Okay fine, so this shark spent all of his money on plastic surgery to widen his jaw, and didn’t have enough left over to have good dental work, so that would explain the square face and no teeth.  Either way, I went to bed that night totally unhappy with the shark, and since it was the cake topper and main focus of the cake, it had to be redone…and I dreamed about shark cakes that night. 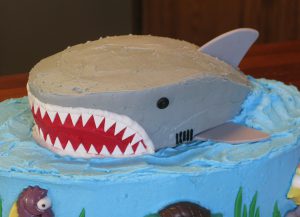 The next morning, I looked back at the cake I was going off of, and saw that this lady had carved her shark from a cake baked in a loaf pan.  Boom.  I jumped all over it, so I just made a boxed red velvet cake mix (for the blood effect of when my nephew cuts into it and all of the boys yell, “Cooool!!!”), and got that sucker in the oven.  I carved the shape before icing it, but had printed out a picture of the shark cake I liked so much and tried to copy that shape as much as I could.  I made the teeth out of gumpaste ahead of time, and just stuck them on the icing after I got it on there, since it sticks much better to fresh icing.  The dorsal fin was also pre-made out of gumpaste as well, along with the fins.  I just rolled out the gumpaste and cut the shapes that I wanted. 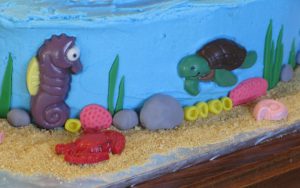 Those chocolates were SO cute on the cake, and the little background decorations here made out of fondant just emphasized all of the color.  The seaweed, coral, and rocks were all made out of fondant., and I sprinkled graham cracker crumbs around the cake for that added sea bottom effect.

Although the shark didn’t turn out EXACTLY the way I wanted (because I’m a psychotic perfectionist when it comes to this stuff, with a professional mentality but stuck with an amateur skill level), it would do for now, and I know that my nephew will love it.  I ended up using an oval cake pan, so his dark chocolate cake with mini chocolate chips and chocolate filling is two layers, and the shark cake on top is a white cake colored with red food coloring, for the blood red aspect of it.

FAST FORWARD to this past year, when my son turned 5 and he is equally fascinated with sharks. When I asked him what kind of cake he wanted, he thought for a minute before exclaiming, “A SHARK CAKE!!!” I let him look at some pictures, and he saw that one above from his cousin’s birthday and said he wanted that one. Yikes. 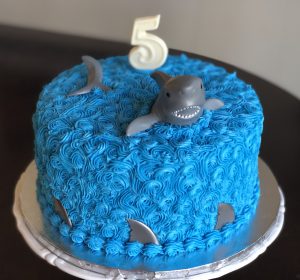 Back then when I made my nephew’s cake, I had a LOT more time on my hands, working from home with a flexible schedule. These days working as a pastry chef, my time is more scrunched, so I had to improvise while keeping my little man happy. After doing some research and improvising on what I could make, I decided on this design. It was easier to put together, yet allowed me to still do some decorating without two weeks of preparation. This shark cake topper was perfect! This is a 4 layer 10 inch cake with two layers of vanilla cake, two layers of strawberry cake, and chocolate filling between the layers.